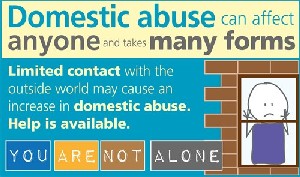 COVID-19/Coronavirus: Safety Advice for Survivors
What is domestic abuse?

Sky News : Coronavirus won't stop police arresting domestic abusers
Tarka the Otter
The novelist Henry Williamson drew on his intimate knowledge of the beautiful North Devon countryside to provide the setting for one of the best-loved of all nature stories, 'Tarka the Otter'. The Torridge valley, with its intimate wooded banks, was Tarka's home territory. Tarka's fictional birthplace was amid the roots of a riverside oak close to Canal Bridge which can be seen from the Tarka Trail. Tarka the Otter is a story tracing an otter's journey through the clear waters and lush valleys of the 'Land of Two Rivers' -the rivers being the Taw and Torridge. To this day, little about the area has changed and its magic remains as powerful as ever.
The Tarka Trail is named after Henry Williamson's nature story 'Tarka the Otter' which was based on many locations along the Trail. Over 30 miles of the Tarka Trail is available to cyclists and walkers between Braunton and Meeth using the old railway routes of North Devon.
Tarka the Otter Film - official trailer released in 1979,
based on the novel of the same name by Henry Williamson.

Tarka The Otter part 3
The Henry Williamson Society  website
The Society was founded in Barnstaple, North Devon, England, in May 1980 at a meeting between keen and interested people. Membership grew quickly and is drawn from all over the British Isles and with a growing overseas membership. Members are from all walks of life; their common bond being an interest in the work of Henry Williamson. From its inception the Society has sought to further the appreciation of Henry Williamson's work. The Society is a Registered Charity, and is governed by its Constitution. It is non-political and is dedicated solely to its literary aim.
The President is Richard Williamson, who is one of Henry Williamson's sons. Other members of the Williamson family are equally supportive. Mrs Loetitia Williamson (Henry Williamson's first wife) particularly took a keen and active interest in the Society's affairs until her death in December 1998.
The Society publishes a Journal and Newsletter annually containing reviews, correspondence, reminiscences of, and work by, Henry; criticism of, and articles based on research into, the man and his writings. The wide and varied content has greatly added to the knowledge and understanding of this foremost writer.
A major project of the Society is to collect and collate the ephemeral writings and articles which previously only appeared in newspapers and magazines. Under the editorship of John Gregory a number of volumes have been gathered together and published under the Society imprint - see the Society Publications page
A main concern of the Society, with the Williamson family, is the preservation of the author's Writing Hut at Ox's Cross, Georgeham, North Devon which was extensively renovated in 1985 but is kept exactly as it was when Henry Williamson was alive, and serves as a memorial.

In 1984, with Lewisham Borough Council, the Society placed a commemorative plaque on the house, 21 Eastern Road, Brockley, where Williamson spent the greater part of his childhood and youth, and which is the setting for the early volumes of A Chronicle of Ancient Sunlight. In 1995, to celebrate the centenary of his birth, similar plaques were placed on Crowberry Cottage, Georgeham (where Tarka the Otter was written) and Owl Cottage in Stiffkey, part of HW's Norfolk Farm.

Henry William Williamson (1 December 1895 - 13 August 1977) was an English naturalist, farmer and prolific author known for his natural and social history novels.
Henry Williamson was born in Brockley, southeast London, and attended Colfe's School. The then semi-rural location provided easy access to the Kent countryside, and he developed a deep love of nature throughout his childhood.
In January 1914 he enlisted in the London Rifle Brigade and, after World War I was declared, he was mobilised on 5 August. He was commissioned into the Machine Gun Corps, was promoted Lieutenant and, from 1917, was attached to the Bedfordshire Regiment. The Christmas truce of 1914 affected him greatly. He became disgusted with the pointlessness of the war and was angry at the greed and bigotry he saw as causing it. He became determined that Germany and Britain should never go to war again.
He told of his war experiences in The Wet Flanders Plain (1929), The Patriot's Progress (1930) and in many of his books in the semi-autobiographical 15-book series A Chronicle of Ancient Sunlight (1951-1969).
After the war, he read Richard Jefferies' book The Story of My Heart. This inspired him to begin writing seriously. In 1921, he moved to Georgeham, Devon, living in a small cottage. He married Ida Loetitia Hibbert in 1925. Together they had six children.
In 1927, Williamson published his most acclaimed book, Tarka the Otter. This book won the prestigious Hawthornden Prize for Literature the following year. With the prize money (£100) HW bought a field at Ox's Cross above Georgeham where he built himself a Writing Hut. The book also sparked a long-running friendship with T. E. Lawrence.
In 1935, Henry Williamson visited the National Socialist Congress at Nuremberg and was greatly impressed, particularly with the Hitler Youth movement, whose healthy outlook on life he compared with the sickly youth of the London slums. He had a "well-known belief that Hitler was essentially a good man who wanted only to build a new and better Germany." He subsequently joined Oswald Mosley's British Union of Fascists in 1937.
In 1936, he bought a farm in Stiffkey, Norfolk. The Story of a Norfolk Farm (1941) is his account of his first years of farming here.
At the start of World War II Williamson was briefly held under Defence Regulation 18B for his well-known political views, but was released after only a weekend in police custody. Visiting London in January 1944, he observed with satisfaction that the ugliness and immorality represented by its financial and banking sector had been "relieved a little by a catharsis of high explosive" and somewhat "purified by fire." And, "in The Gale of the World, the last book of his Chronicle, published in 1969, Williamson has his main character Phillip Maddison question the moral and legal validity of the Nuremberg Trials".
After the war the family left the farm. In 1946 Williamson went to live alone at Ox's Cross in North Devon, where he built a small house in which to write. In 1947 Henry and Loetitia divorced. Williamson fell in love with a young teacher, Christine Duffield and they were married in 1949. He began to write his series of fifteen novels collectively known as A Chronicle of Ancient Sunlight. In 1950, the year his only child by this marriage Harry Williamson was born, he edited a collection of poems and short stories by James Farrar, a promising young poet who had died, at the age of 20, in the Second World War. From 1951-1969 Williamson produced almost one novel a year, while contributing regularly to the Sunday Express and The European, a magazine edited by Diana Mosley. This put great strain on his marriage and, in 1968, he and his wife were divorced after years of separation.
In 1974 he began working on a script for a film treatment of Tarka the Otter. but it was not regarded as suitable to film, being 400,000 words long. Filming went on, unknown to him, and the movie, narrated by Peter Ustinov, was released in 1979. On his eightieth birthday he hoped for some honour from the British government. After a general anaesthetic for a minor operation, his health failed catastrophically. One day he was walking and chopping wood, the next day he was unrecognisable and had forgotten who his family were. Suffering from senile dementia, he died, by coincidence, on the very day the death of Tarka was being filmed, and was buried in the churchyard of Georgeham.
In 1980 the Henry Williamson Society website was founded, and it continues to this day.